What Do We Sacrifice For Security? 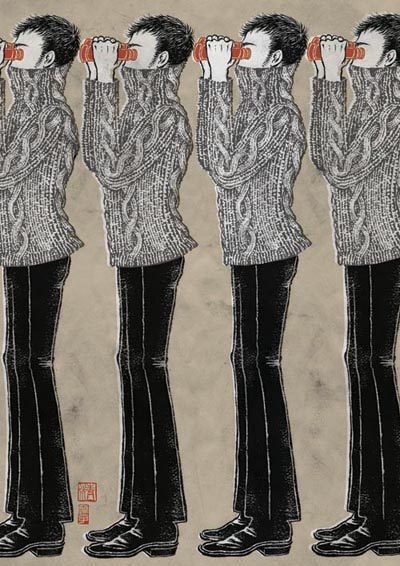 “What do we sacrifice for homeland security?”That was the topic thrown at me from a team of curators for an exhibition called Embedded Art – Art in the Name of Security –. Show is now going on across the pond in Berlin, Germany up to late March. Main part of this show consists of site specific installations, but also as a side project, multiple graphic designers were invited to create posters in the same theme. 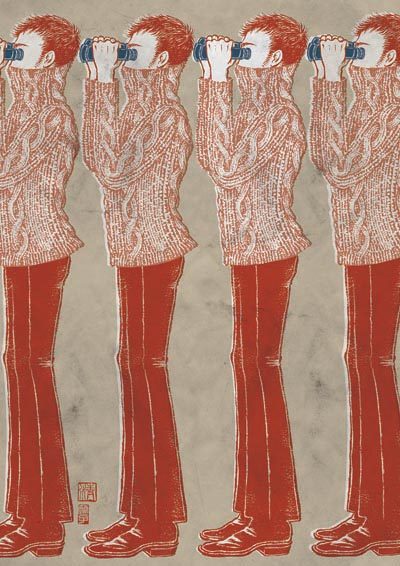 I came up with an idea in two color schemes, after a long period of communicating back and forth with the curators, and some help and advise from artist friends.

I actually personally liked the black version better, but at the end, the curators went with the red one for the practical reason of adding type to the finished poster 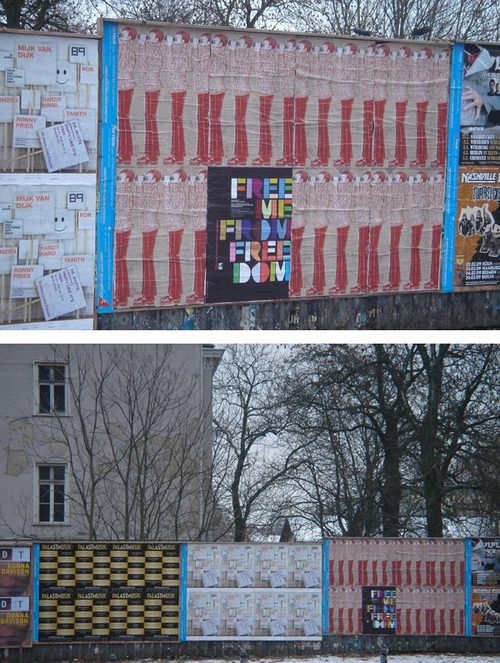 Most of us, illustrators, are used to seeing our work in magazines, newspapers, on book covers, etc… a lot smaller scale. It was a refreshing experience to see these photos of my work in a larger scale. A friend just sent them to me from Berlin. Curators decided to put the posters together, so they make illusion of never ending line of everyone watching everyone.

And here are some sketches. Some worked, some didn’t. Also interestingly, some would have worked in editorial context or domestic use, but once the context was taken out of publications and/or the border of the US, all of a sudden some started having different meanings which made them not work. It was definitely an interesting topic to work with. I am fully aware that some of the sketches here are not good at all. But hey, I have no secret. I wanted to show them anyway, just to share especially with aspiring illustrators. Yes we do sometimes come up with really bad ideas first to reach good ideas at the end. Fair? 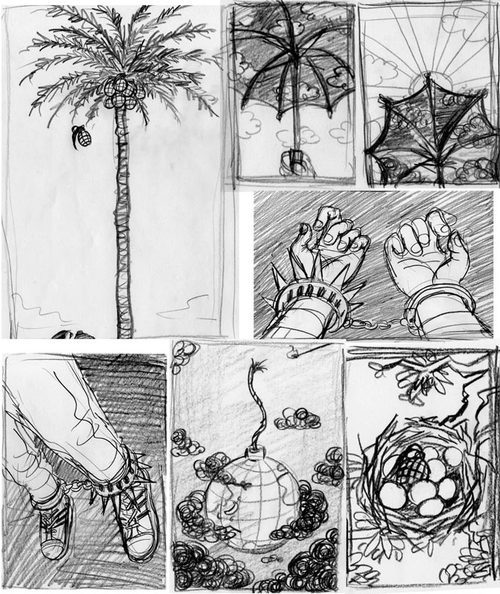 And, here are the last narrowed down ideas. One became the poster, and the other one, which curators told me “too poetic for the poster” (I totally agree) but I still liked a lot, ended up getting published in The Atlantic later. Happy endings for both of my favorites! 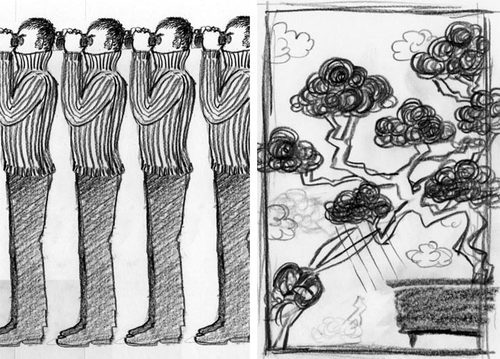 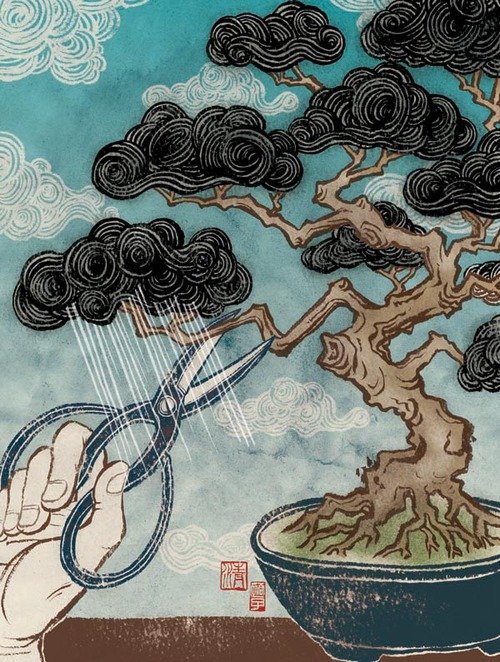 Last but not least, thank you Moritz and everyone who was ivolved in the show, my good friend Harri for introducing my work to them, and Jason of The Atlantic for accepting the raining bonsai to his magazine.
Tweet 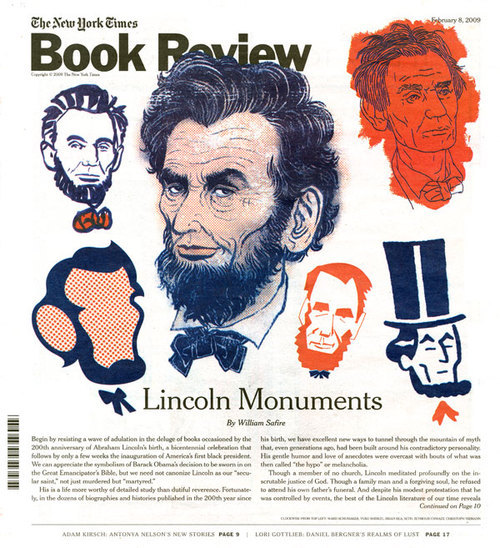 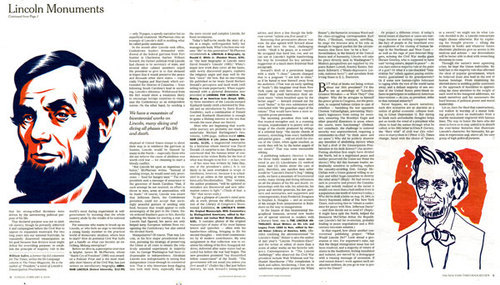 And here are my original drawing (left) and final image. As you can see, I gave Abe a bit of “plastic surgery” making him smile a bit and changed the eyes to look more like himself. I usually don’t do much of plastic surgery on Photoshop, but it sometimes happens when I am working on portrait and trying to nail it. 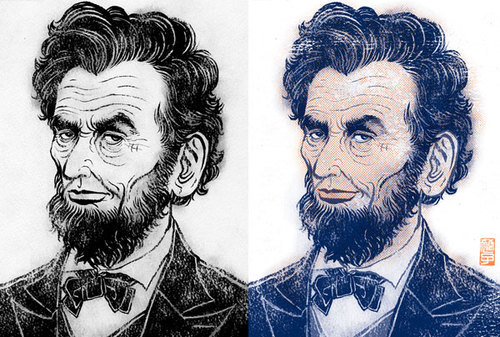 You can also see all the illustrations on New York Times site as a slideshow.
Tweet

Chew On This: Support Next Generation Of Creative Minds

I heard on the news recently that people feel most happy and fulfilled not by monetary insentives, but by rewarding feelings we get from doing something for others, regardless of our income level, type of jobs, race, age, etc. I love the fact we artists can contrubute our artwork, and go way beyond what we could have contributed in money.Sticky, a creative agency in Chicago and Retail Advertising & Marketing Association came up with a very creative idea to raise scholarship fund for students at Columbus College of Art and Design in Ohio.

Four artists, including myself was invited to design gum packages based on the stories Sticky has created. 12 packs of gum in a carton is sold for $25, which will fund Randy Curtis Memorial Award.

My image is based on a trippy story about a third nipple escaping a girl’s body,  travels across the continent and go surfing. (Yes, you read it right.) Because the story was so out there, and the package features a surfer  on the wave of thousand nipples, the gum got rejected from production at the last minutes.

But of course, it is the bunch of creative minds who are working on this project, they ended up managing to produce this gum, as a “banned and limited edition”. If you are interested,  you can also buy this gum, chew on this, all for a good cause. 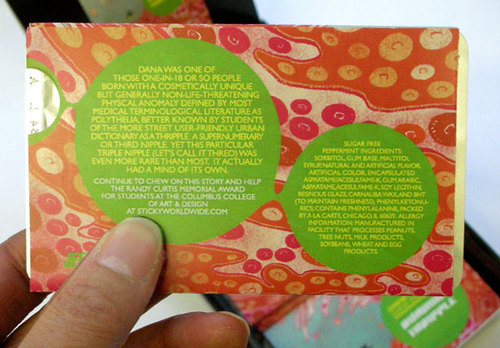 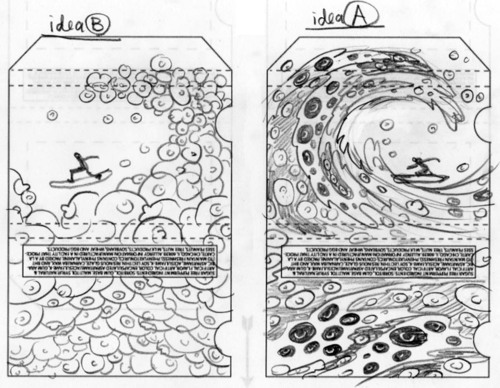 Here are two sketches I initially submitted. We ended up going with more subtle one, which, we think we made the right decision. 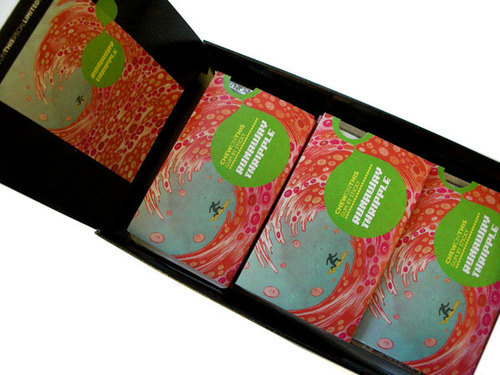 I don’t know how many times friends and people I know had told me I should start a blog. It has been like… 3 years. It is my nature to overthink, and be extremely cautious. That is why it took so long. I wanted to find the right way to blog.

So, here I am! Spoke many times with Zimm and other wonderful people already blogging at Drawger, I have finally decided that this is home for my blog entries.

Hi everyone at Drawger, thank you for accepting me into the grouop. And those who are not at Drawger but maybe interested in reading my post, thank you in advance.