Orange News of Hong Kong wrote an article on me for their 型女feature where they interview women working in various fields. You can read the article (mainly in Traditional Chinese with some English) on their site. Here is the original Q&A I had with the writer Cassie Ching 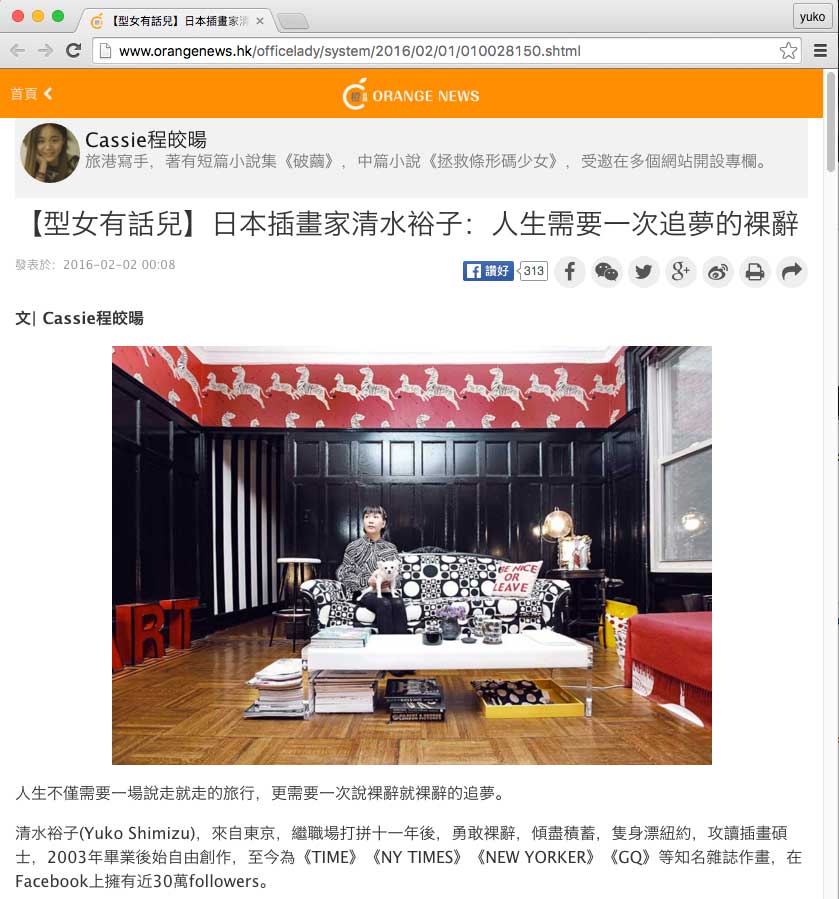 My name is Yuko Shimizu, I am an illustrator based in New York. I am originally from Tokyo, Japan.

2. How did you become an illustrator?

I have been drawing ever since I was a small child, but it took a long time becoming one.

Because my parents were afraid of my pursuing a unstable and unpredictable path in art, and because I was young and I didn’t really know what I wanted to do with my life, I ended up going to a regular university in business major (it is technically called Commerce 商学部). I studied advertising and marketing there, because I thought they were the most creative of a practical field. I ended up getting a corporate PR job in a large company in Tokyo, and because I still didn’t know what I wanted to do, I ended up staying there for 11 years in total.

I didn’t hate the work, it was actually interesting. But being in office environment, especially complicated and unnecessary office politics was not for me. I struggled a lot with that. Around when I hit age 30, I started to seriously think of future to see if I can see myself working there for years to come. The answer was no.

After 11 years of working, I took the savings I put aside during my tenure there, moved to New York and enrolled myself in art school for the first time in my life. I studied at School of Visual Arts (SVA) and graduated with master’s degree in illustration in 2003 after four years of being back in school. I have been illustrating freelance since, and I have also been teaching at SVA part time since. 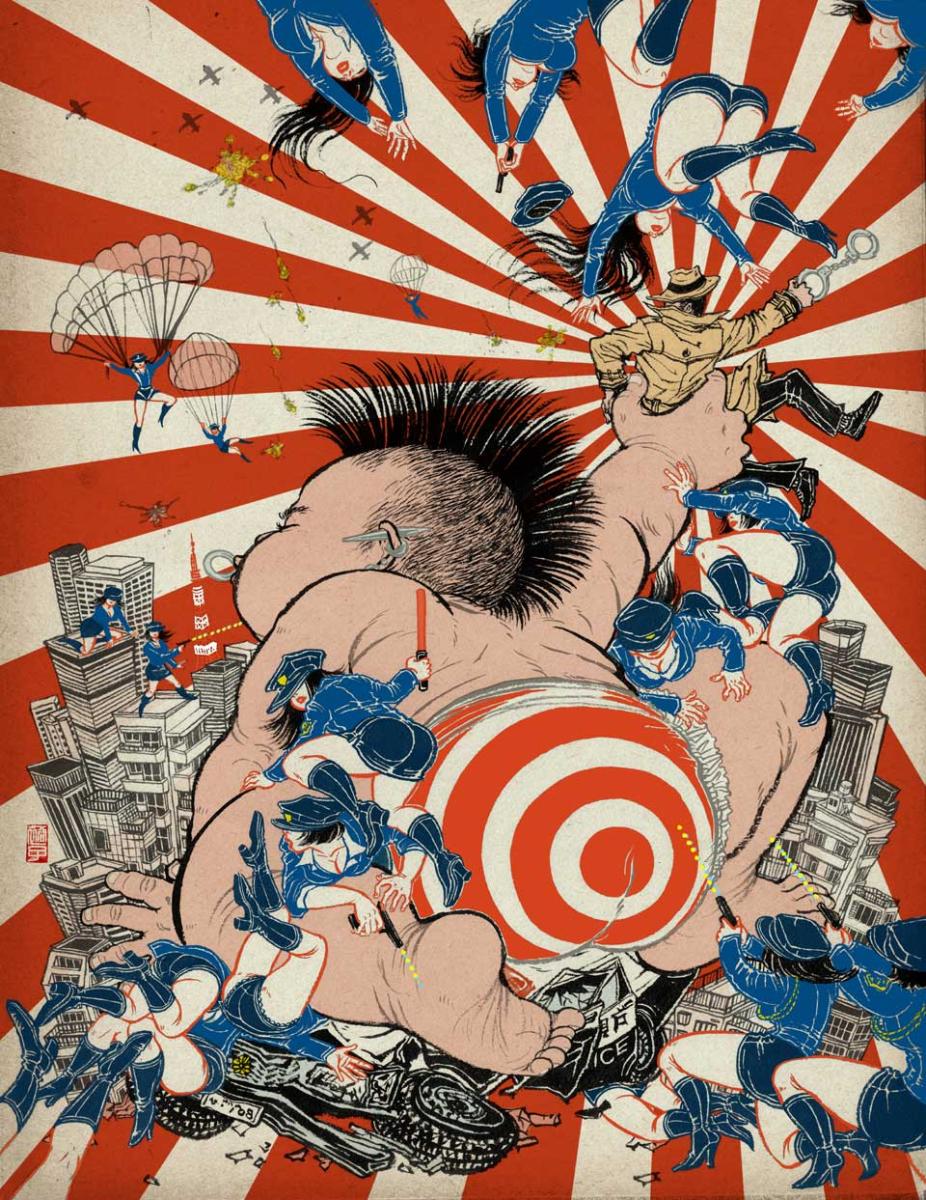 People tend to say it is a mix of traditionally Japanese and contemporary American/Western. So, I guess that’s what it is. When Westerners see my work they say they are very Japanese. When Japanese people see them they think it is very ‘gaijin’. That’s also who I am too, so it does makes sense.

4. Where do you get inspiration?

What people often misunderstand about our occupation is that they assume we create based on inspiration. Of course, there is some inspiration aspect, but it is mostly based on lengthy and thorough research on the subject matter we are illustrating that we obtain the concrete idea on what to illustrate.

It is not really magical or mystical. The more I know about the subject I am illustrating, the more interesting ideas I can come up with.

Having said that, in the occupation where a lot of what we do is creative output, it is very important to have  good input to get good output. I value the time taking in information that is not directly associated with illustration, or subjects I am illustrating. Thus, escape from reality becomes crucial in every day life.

Every day basis, on the subway commute between home and studio, I read a book. My commute is very short, so I don’t get a lot of reading done, but at least, I read daily. It is a better way to kill time than meaninglessly staring at my phone.  I also try to read more books on things that are foreign to me. For example, I am reading a novel about Ottoman Empire now. The next ones on my ’to read’ pile are a popular novel from Iran as well as a historic fiction that takes place in Dominican Republic. Reading is a good pastime, but it can also be a doorway into unknown. I don’t know what to expect from those books yet to be read. But what I know is that when I am done I will be a bit wiser, in terms of knowledge and understanding of cultures and histories that are foreign to me.

Whenever I can, I travel. Most of my travels are currently work related, such as speaking at conferences or teaching workshops. Those trips are not planned by myself (though I can say either yes or no to the invitations), thus, give me chances to travel to places I have not been or would plan differently if it was my own vacation.

Those trips are the best source of inspirations. Everything is new and fresh and stimulating.

Those input really fuel my creativity in a long run, even if not direct inspirations to the next piece I am creating. 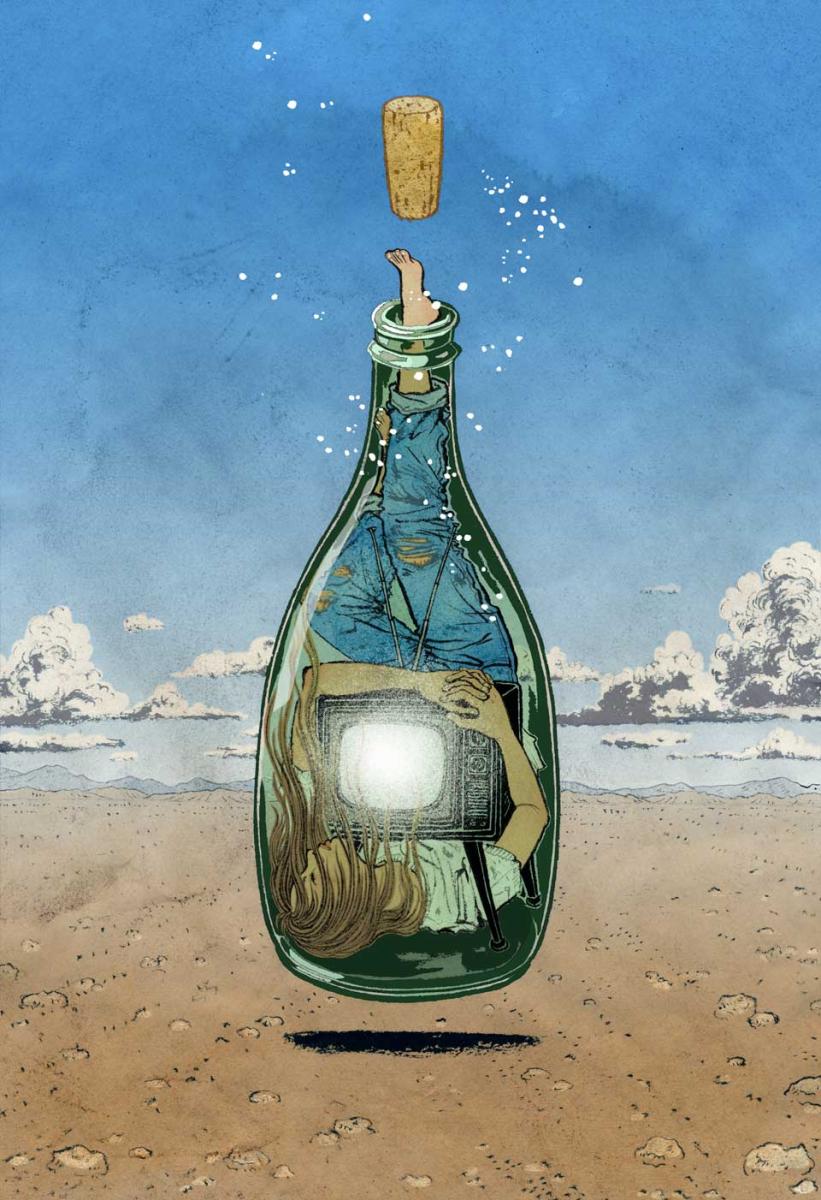 5. How does a normal day as a famous illustrator go like?

Famous? Ha ha. that is a funny thing called ‘famous’. I am just a freelancer who sits in my studio alone in front of my drawing or on the computer all day. I don’t have any sense of that I am famous. I guess some people do know my work, but that’s where it stops, pretty much. It is not that I get stopped in the middle of the street and being asked to autograph.

There is an idea that we, creative freelancers, are night owls and we work in the middle of the night, but I am not like that. I wake up by 6:30AM-ish, and do house stuff for a few hours, then come to the studio by 10AM or so. I do work long hours though. I often work till 8 or 9PM, if not later. But I don’t ever do all-nighters. At some point in the evening/night, I wrap it up and go home. Focus and creativity stems from healthy living, so I take sleep seriously. I try and go to bed by midnight at the latest, and get enough sleep. I also cook all my lunch and bring home made lunch to work.

I try not to go into my studio over the weekend, though, of course it depends on deadlines and schedule. But I do take the importance of taking time off from work so I don’t get burnt out seriously.

What I do in the studio every day differs. Sometimes I draw all day long. Sometimes computer coloring. Other times it can be all paperwork catchup day. And of course, often there are days when it is mix of some or all. But I try not to do too much of multi-tasking. When I am working on multiple projects simultaneously (which is most of the time), I seldom ever work on them all at once. Focus is the key to get work done. So, I try and avoid multi-tasking of  multiple projects to keep the focus in place. I move on to a  new project when I am either finished with a project.

Energetic, exciting, expensive. (sadly, the third one has to be in the mix… )

7. Do you prefer New York or Japan? Why?

That is not even a question. I left Tokyo in 1999 and only been back twice, each about one week stay. I really feel like I have served time there, and no desire to ever live there. But of course, it is OK to go back time to time as long as it is not too often.

8. Who is your favorite artist? Why?

I don’t think I can name one, or even a few, artist name(s) as favorite. I grew up as an artist getting inspired by and influenced by, as well as admired their work, then moving on or grow out of them. It is by repetition of that you develop yourself as an artist, especially in early stage. There are also visual artists who do things similar to I do, and there are visual artists who do things nothing similar to, both in style, and in genre, I do. There are also non-visual artists who I absolutely admire. The more I mature as an artist myself, the more I admire artists who work in completely different genre or medium or style from what I do. I think artists develop our eye more and more as we develop as artists ourselves.

Though they are not the only two I admire, obviously, from my explanation, but since you are located in Hong Kong, let me mention two names who are strongly associated there. I love Wong Ka-Wai and Christopher Doyle. So much so when they came to do a panel talk during New York Film Festival some years ago, I ran to get the ticket. They started something that nobody else did, that are fresh, new and exciting. I really admire anyone who try to be the originals. 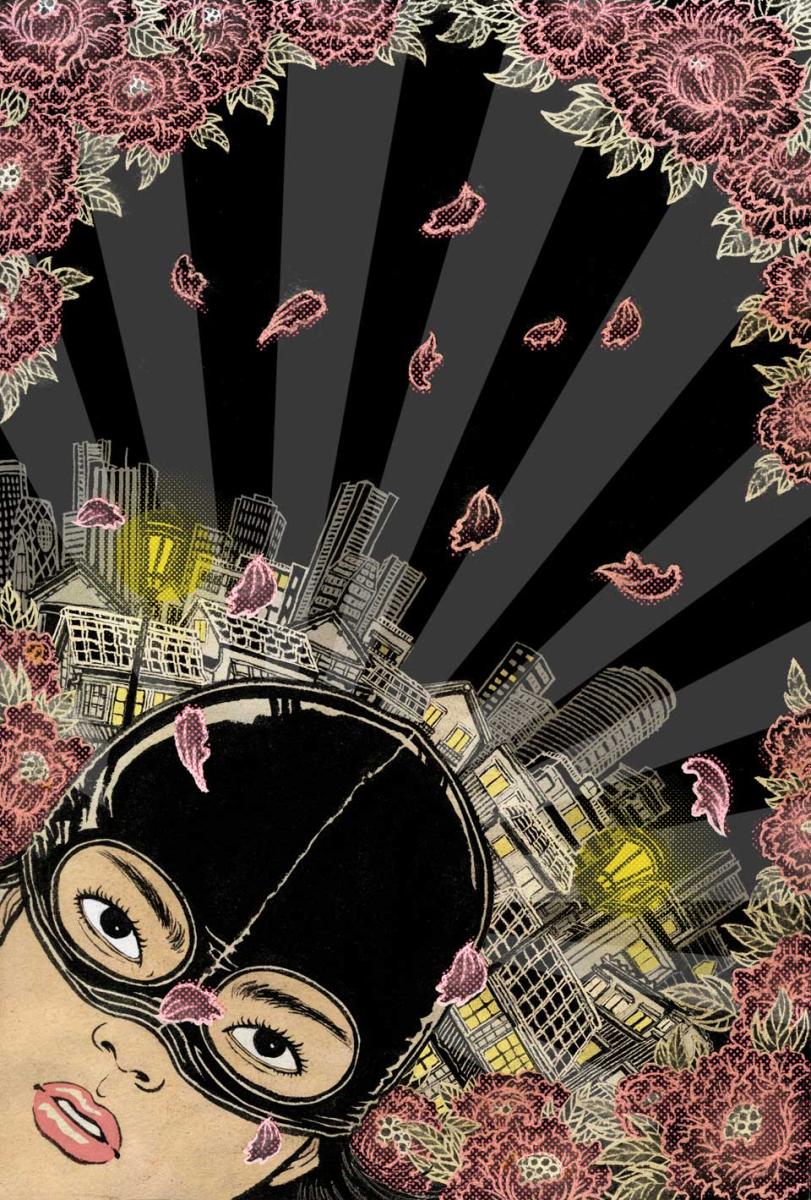 9. Do you think you are a 型女(cool, special, stylish female who is being honest with herself?

Hmmmm, I will let other people decide that about me.

Aung San Suu Kyi has always been a woman I really really look up to. 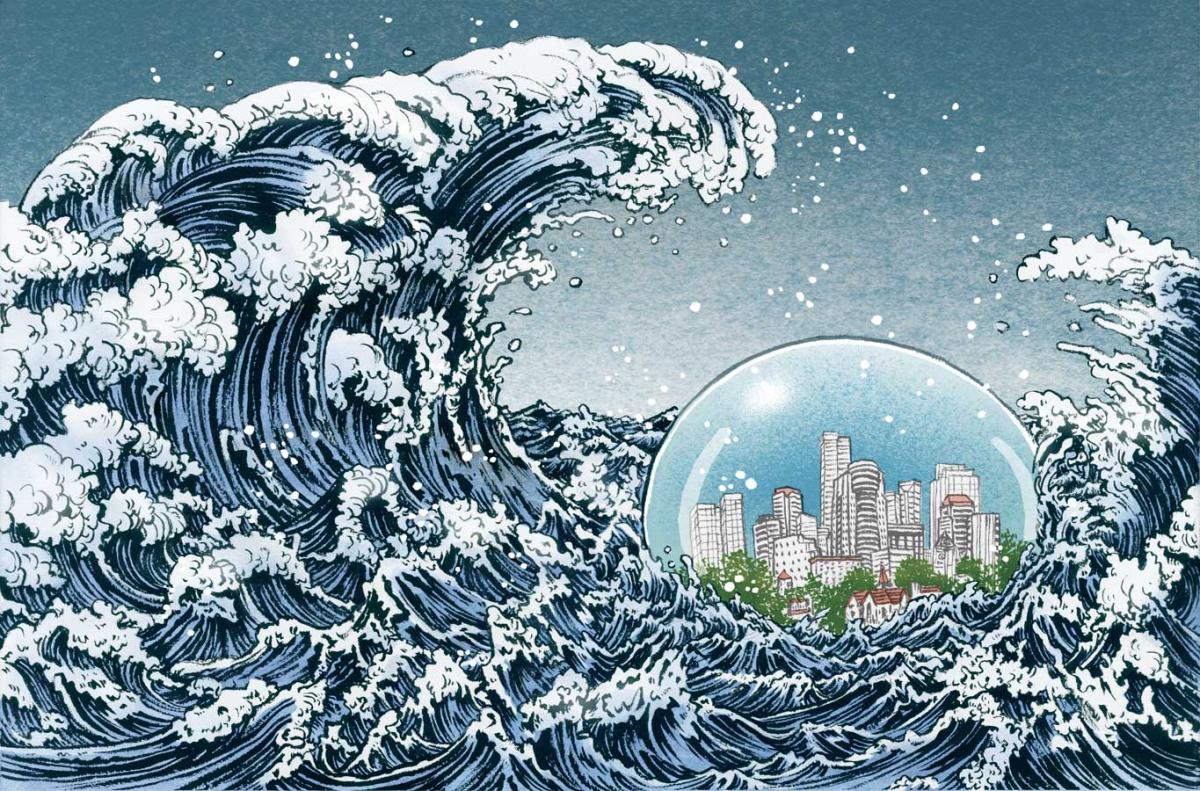