We Will Rock You 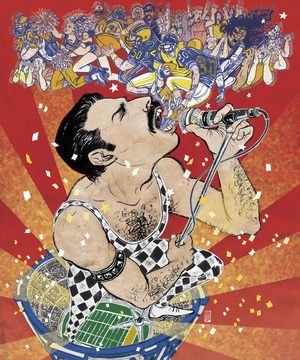 I don’t like to regret. So I try not to dwell over things that didn’t work out in past. But there is one incident I cannot get over after many many years: missed a Queenconcert, with, yes, a backstage pass.I grew up with an older sister so when I was in elementary school I was already familiar with such Queen albums as A Night At The Opera and Sheer Heart Attack. Yes, long before the famous News of the World album became the super-mega-hit.

Somehow, my social savvy sister got backstage pass to Queen concert in the 80s and invited me to come with her. I don’t know why I didn’t. I probably was too young and maybe midterm exam was more on my mind than Queen. Stupid me.

My sister came back with tons of photos of Freddie and Roger and rest of the band members eating yakitori in a small restaurant during the after party.  And that was the last tour Queen had in Tokyo before Freddie Mercury passed away shortly after.

Illustrators all have our ‘dream job list’. In the beginning, we get excited crossing one out at a time. After a while we realize it is OK not to cross everything out and eventually forget about the list. But once in a while, out of the blue things on the list come back and surprise us with excitement.  Needless to say Freddie Mercury was on the top of my list, but I thought the day would never come because it has been so long since he has left this world.

Siung Tjia, Creative Director of ESPN The Magazine, is a friend, but most of the time we talk about Chinese movies we love and Korean food we want to try for next lunch, so I assume he had no idea about my dream job list when he called me.  Well, thank you Siungl! This was such a treat and a PERFECT assignment. And designer was Lou Vega.

The story was about America’s No.1 Stadium Anthem. Of course, it was Queen’s We Will Rock You written by Brian May.  The article (and illustration) is in the latest issue of ESPN on newsstand now. 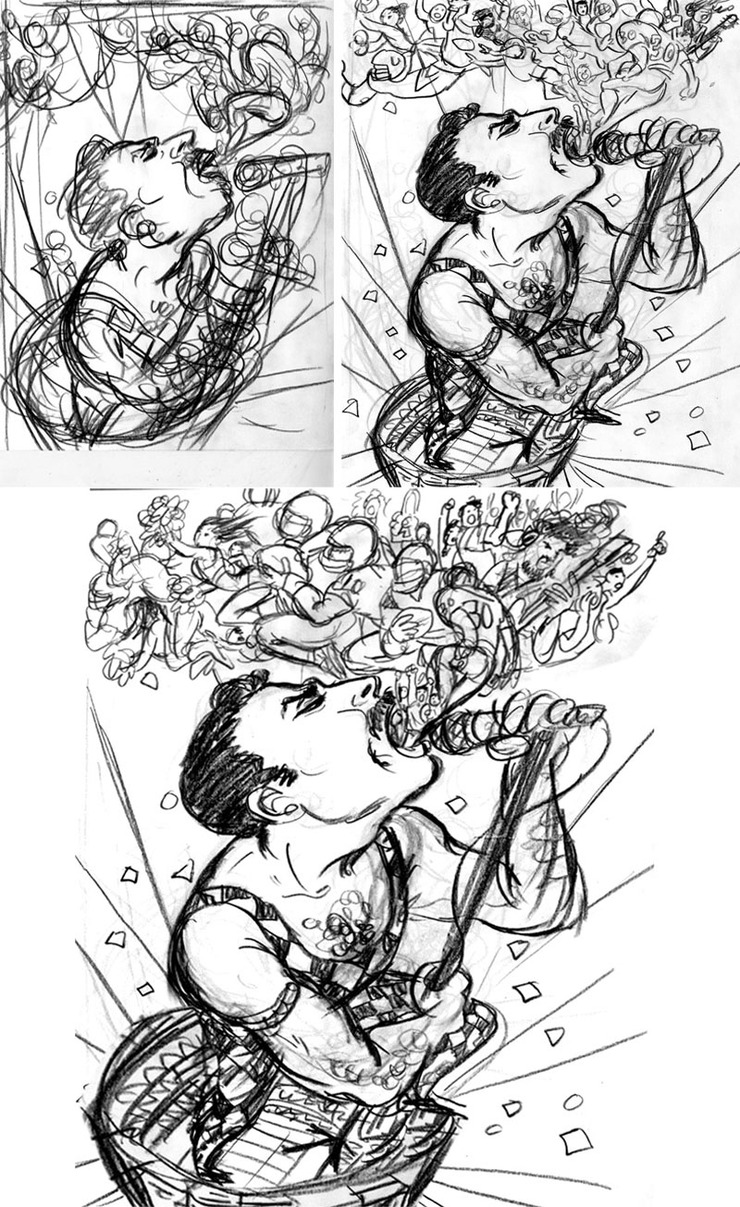 Rough layout first, then to a sketch, then to revised sketch with larger crowd and prominent stadium. 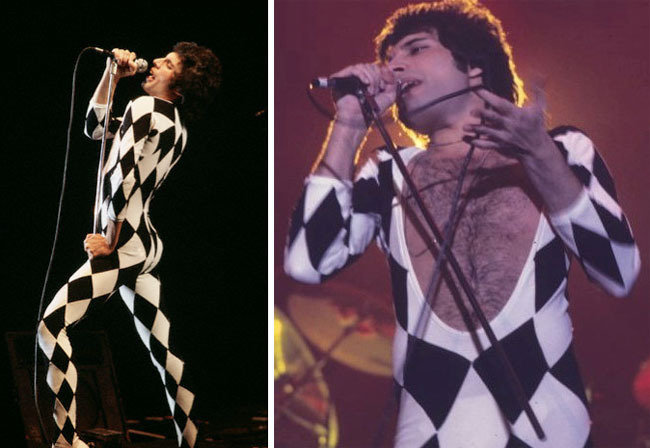 For me, Freddie is all about THIS costume. It was long before We Will Rock You, but I had to put him in this outfit. This shocked me when I was about 10 years old…

Gathered a lot more reference of Freddie (when he was older). I noticed he holds the microphone in a specific way, so I mimicked that in the final illustration. 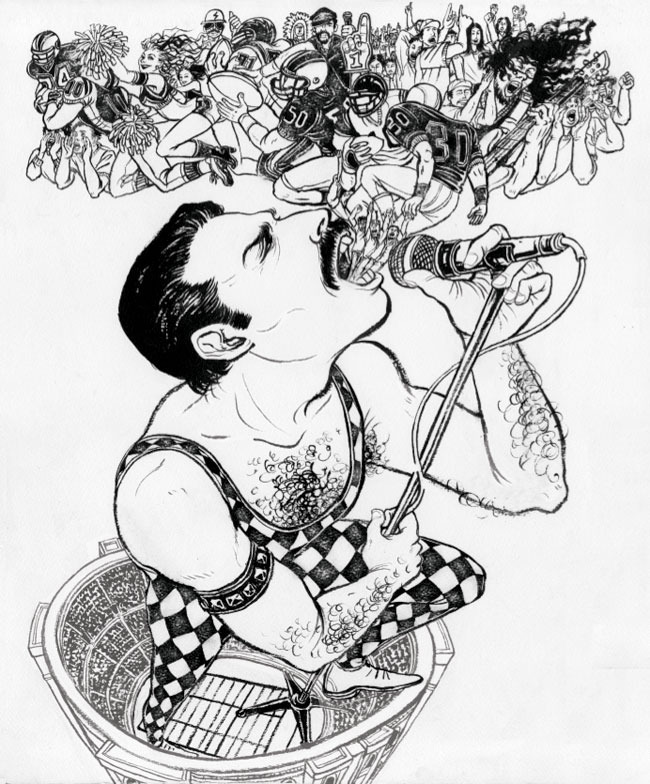 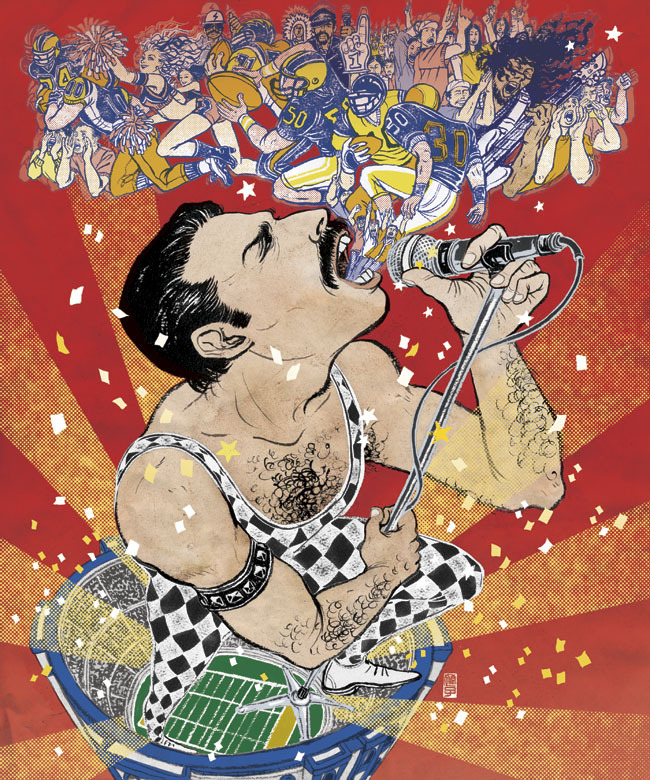 Final image. I worked extra hard on this (not that I don’t work hard on other ones). Ah, flash-back of the missed last concert and Freddie in yakitori restaurant photos while working on this….

Details of the crowd. Metallica and Village People also made the list. 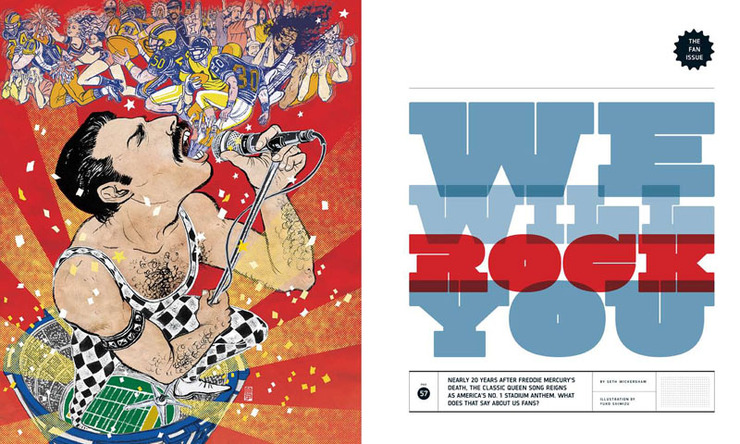