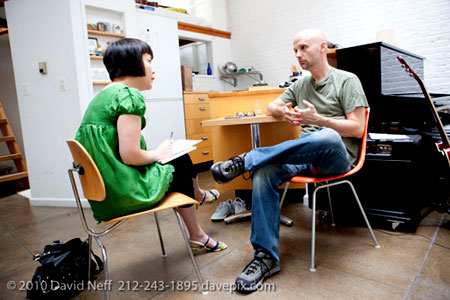 The highlight of past week: interviewing musician MOBY to write an article in イラストレーション,a well respected illustration magazine published in Japan. I have been a regular contributing writer for more than a year now.I normally interview illustrators (you can read about past interviews on my blog here), but after my studio mate and Moby’s former art collective member Sara Varonand I saw him speak at WNYC last month and learned about his passion for art, comics and illustrations, we came up with an idea of interviewing him from a visual art point of view.I have a huge respect in him. All I could think of while I was there was to not do or say anything stupid. He was VERY nice and had some great stories to tell. The article, along with features of three of his former artist collective members (Sara Varon, James Kochalka and Alex Eben Meyer) will come out as a big feature in イラストレーション at the end of July. I am currently working on editing the story.